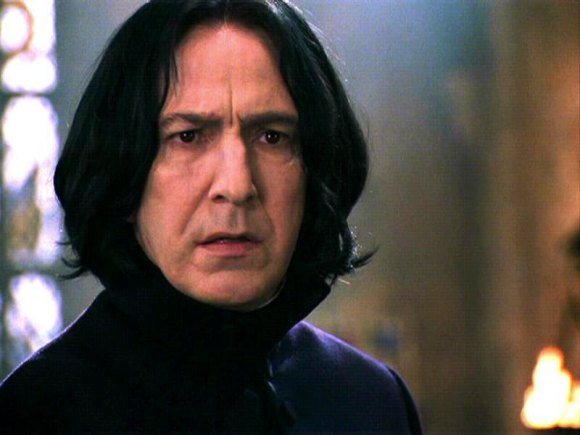 How Alan Rickman Got Me Through Chemo

I swear it wasn’t a crush, although I’ll admit, Alan Rickman is easy on the eyes, even at nearly 70.

No, it was something he said. More accurately, something his character Severus Snape said that resonated with me as I watched the entire anthology of Harry Potter movies that I’d somehow collected while going through chemo.

I’m not quite sure what it is about a cancer diagnosis that makes children’s movies so appealing. I noticed it when my father was diagnosed with lung cancer, how he went from a Die Hard diehard to someone who preferred the Disney channel in his final days. And it wasn’t even as if he knew they were his final days.

Later, when I was struggling through chemo and the heaviness of dealing with just getting through one day without jumping in front of a moving train (I think the only thing that kept me from it was that I just didn’t have the energy to move) I understood my father’s new addiciton – or fascination – or appreciation for those simplistic movies.

While his were Narina and Polar Bear Express, mine became the Harry Potter franchise.  It was one of the final scenes in the Half-Blood Prince – which set the stage for how the entire series would end – that got me. Dumbledorf was counseling Snape in some hushed conversation, to which Snape replied: “You ask too much of me.”

In that moment, I knew exactly what he meant. I had a kindred spirit out there, even if he only lived in some childhood fantasy tale.

That line echoed in my mind throughout the rest of my treatment, along with the image of Snape, my cohort, an anti-hero who knew my pain. When things got dark, I would look to his character for strength – a man on a mission, willing to go it alone, whose friends and family couldn’t understand why or what he was going through. A quest that asked too much of him.

It’s silly, I know. And the end of the series troubled me (so much so, that I’ve re-written it hundreds of times in my mind so that Snape doesn’t actually die, but is saved by the phoenix, much like Harry Potter was in The Sorcerer’s Stone. It was difficult enough to fight for my own life. I wasn’t able to sacrifice my confidante’s.)

Rickman’s death, like David Bowie’s, caught me off guard, particularly since we share the same disease.   I’ve learned, though, that in the end, we write our own stories, just as I re-wrote the saga of the Harry Potter character I became so endeared to who helped me heal (and kept me from jumping in front of moving trains).

Perhaps now is a good time to ask myself: How does my story end? And then, work backwards from there.