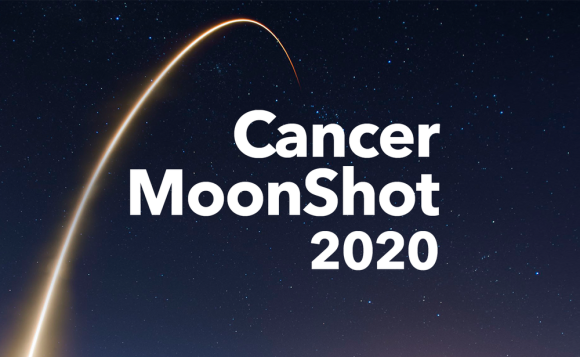 Cancer Moonshot? What the heck does it mean?

By Liz Johnson January 19, 2020 cancer, when you get to the moon turn right
No Comments

My cell phone pinged all day yesterday with texts from cancer organizations I’ve supported alerting me to tune in to the Cancer Moonshot Summit.
I didn’t, of course. Life was too busy and the truth is, I still haven’t figured out how it will benefit me. I know it has something to do with getting researchers cheaper access to currently approved drugs so they can test them with other drugs. This I understand more than most because cancer isn’t fought with just one drug. I’m currently on three different ones, each aimed at targeting the cancer or protecting my body from the cancer in a different way.
And even with the promise of immunotherapy around the corner – a drug that will teach my body’s immune system to kill the defective cancer cells on its own making it the closest thing to a cure – my doctor has told me it still just won’t be that one drug, but an addition to my cocktail.
I also understand that this “moonshot” is suppose to make all researchers play nice and share their findings rather than hoarding them in hopes that they’ve stumbled upon a lucrative secret they can sell to hungry pharmaceutical companies looking for their next blockbuster drug.
So then, is the moonshot just politicos fighting politics?
Today I was besieged with questionnaires from those same cancer organizations asking me if I’d participated in a clinical research trial (No, I haven’t) or was I offered the chance (Yes, I was) and if so, why didn’t I (Because I’d rather go with the devil I know than the devil I don’t).
I spent a good deal of today reading through the news stories trying to figure out what it all means. What I found is that it may mean more money for research, it attempts to remove red tape for researchers but it really doesn’t promise a cure because cancer is a term used to define defective cells that are too diverse.
Perhaps instead of moonshot – which would mean we’re shooting for one destinatlon – they should rename it galaxy shot, which might give us a better clue about the scope of what they’re hoping to achieve.